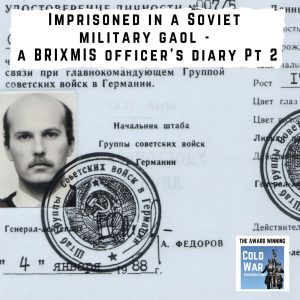 This is the 2nd part of my interview with Lt Col. Stephen Harrison, MBE who served for two years as a full-time Touring Officer with BRIXMIS. The tours were hazardous three-man, vehicle-borne patrols collecting intelligence on the Warsaw Pact forces in East Germany for up to five days and nights over a series of four-month patrolling periods.

Stephen’s speciality was using his language skills to engage and befriend opposition troops and thereby gaining valuable intelligence. He used to go into bars frequented by Soviet officers and recalls one particular drunken night in Potsdam..

We also hear about his visit to the infamous World War 2 prison camp of Colditz castle where he befriends the staff enabling other BRIXMIS tours to visit regularly.

Stephen also shares details of the top-secret Operation Tomahawk, a particularly unpleasant mission which may not be for those of a sensitive disposition.

In later years Stephen obtained his Stasi file which reveals that the surveillance on him was far closer than he’d ever believed.

I am delighted to welcome Stephen to our Cold War conversation…