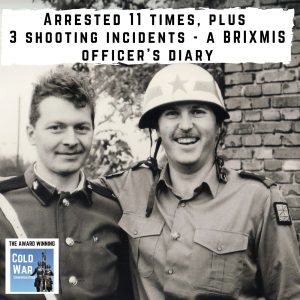 Lt Col. Stephen Harrison, MBE served for two years as a full-time Touring Officer with BRIXMIS. These Tours were hazardous three man, vehicle-borne patrols collecting intelligence on the Warsaw Pact forces in East Germany for up to five days and nights over a series of four-month patrolling periods.

They lived in the field and did not carry weapons while Soviet and East German troops were nearly always armed, and their ever-present sentries carried live ammunition. The Tours operated in the closest proximity to these hostile and aggressive Warsaw Pact troops whose orders permitted them to use whatever force necessary, including opening fire, to protect the property they are guarding.

We hear in detail about  Stephen’s experiences in these demanding and frequently dangerous situations, as well as how he used his language skills to engage and befriend opposition troops gaining valuable intelligence which made him a particular threat to the Soviets.

Don’t miss Part 2  of this fascinating interview next week.

I am delighted to welcome Stephen to our Cold War conversation…