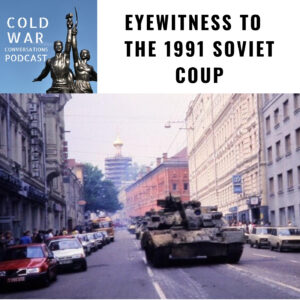 As a 24 year old Kieran Williams was in Moscow staying with Soviet friends when the 1991 Moscow Coup occurred.

He is a Professor at Drake University in the United States and previously he taught for nine years at University College London’s School of Slavonic and East European Studies, where he was an associate professor in politics as well as a frequent consultant to the UK Foreign Office. He is a specialist in the politics of Central and Eastern Europe, he has authored or co-authored four books, including a prize-winning account of the 1968 events in Czechoslovakia and a biography of the writer-statesman Václav Havel.

Now as I’m sure you know some of our fans who are helping the podcast financially, so if you’d like to join this select band? Then sign up to Patreon.  For the price of a couple of coffees a month you help to cover the show’s increasing costs and keep us on the air, plus you get the sought after CWC coaster too.

Back to today’s episode,  Kieran  gives a rich eyewitness account of those edgy days with vivid descriptions of what he saw and felt during that tumultuous time.

Kieran’s photos of the Coup – well worth a look!

Below is Kieran’s audio recorded at the time – an amazing record of a pivotal moment in the Cold War.