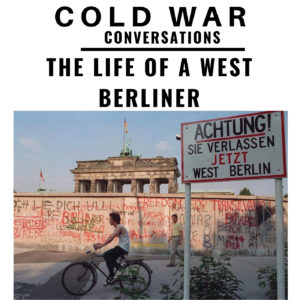 Welcome to Episode 34 of Cold War Conversations – I do hope you are enjoying the content.

Please leave reviews on itunes, or alternative podcast platforms and share us on social media. It helps raise the profile and helps us get new guests.

Today ee talk with Samy who as a native West Berliner describes growing up in the city during the 1970s and 80s.

He describes in detail the difference between West Berlin and West Germany, including its position as a “special political entity”, how the death penalty in West Berlin was only abolished in 1989 and how as a child he was obsessed with Spy movies, spy books, and Cold War activities.

Before we go further I’d like to thank all our Patreons who donate monthly to support the podcast further and get access to some exclusive extras. Luke Wooller is our latest Patreaon who pay as little as a $1 or a £1 a month to help keep us broadcasting and expanding the show.

Ok so back to today’s episode – Samy also talks about the battle between the East and West German Sandmännchen resulting in victory for the East.

Samy joined the Red Cross post Cold War but discovered some interesting remnants of preparedness in case of another Berlin blockade including some top secret locations.

I’m sure you will enjoy his account and I am delighted to welcome Samy to Cold War Conversations.

In 1988, a group of young people occupy the Lenné Triangle, a plot of land that lies right by the Wall, in an attempt to stop a motorway being built there. Although the site is in West Berlin, it is actually the property of East Berlin. The occupation makes a tourist attraction of what was once just a wasteland.

Not long after the young people arrive, the Lenné Triangle is handed back to the West and several hundred police officers begin clearing the site. They fire teargas and use water cannons, and the squatters retaliate by throwing paving stones. A lot of the protestors manage to flee across the Wall to East Berlin, where they are given breakfast and later allowed to take the U-Bahn back to the West.