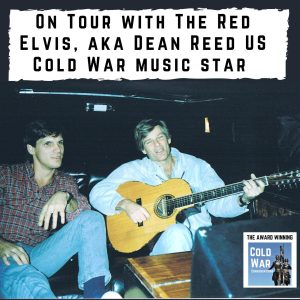 Warning: This episode does cover the subject of suicide. If you need help please use these links:

Dean Reed was an American actor, singer and songwriter, director, and Socialist who became a huge star in Latin America and the Eastern Bloc. Neil Jacobs is a guitarist who first met Dean Reed briefly while renting accommodation from the director of a documentary of Dean Reed called “American Rebel”.

Neil later served on the US Cultural Delegation to the Moscow World Youth Festival in 1985 and unlike most of the participants,  he was assigned by the Soviets. We talk about how he came to attend and his experiences at this event.  It was at this event he began his friendship with Dean Reed.

Neil then traveled extensively with Dean Reed both in the US and in the Eastern Bloc from 1985 -1986 and was one of the last people to see him before his death.