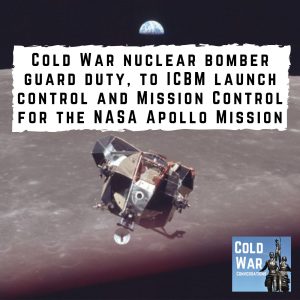 Richard Stachurski joined the  US Air Force in 1962, on the cusp of the Cuban Missile Crisis as a security police officer guarding nuclear-armed B-58 Hustler bombers.

Within two years he volunteered for the Minuteman nuclear missile program where he served as a Deputy Missile Combat Crew Commander with the 68th Strategic Missile Squadron at Ellsworth AFB, South Dakota. Richard was the junior officer on a two-man crew in a launch control capsule buried beneath the South Dakota prairie who was charged with monitoring the status and launching if necessary ten Minuteman ICBMs.

In 1965 he was selected as one of 128 Air Force officers to be loaned to NASA to support the activation and operation of the Manned Spacecraft Center in Houston, Texas. He worked his way up to being a Network Controller, who sat two consoles to the right of the Flight Director in the Mission Operations Control Room. He was responsible for all the ground systems that supported an Apollo mission and was selected as the lead Network Controller on Apollo 11 working on both the launch from Earth and the first-ever launch from the lunar surface.

Cold War history is disappearing; however, a simple monthly donation will keep this podcast on the air. You’ll become part of our community and get a sought after CWC coaster as a thank you and you’ll bask in the warm glow of knowing you are helping to preserve Cold War history.  One-off donations are also welcome.