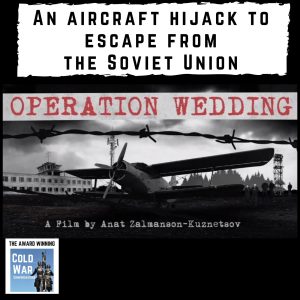 Back in the 1970s, migrating from the Soviet Union was an unattainable dream for many, particularly Jews wanting to leave for Israel. To leave the Soviet Union for another country, it was necessary to obtain exit visas — formal permission from the authorities to migrate. In practice, many people found it impossible to get.

On the morning of June 15, 1970, 16 Soviet Jews who had been refused exit visas showed up at the Smolny Airport near Leningrad to hijack a plane. They posed as a group going to a wedding — hence the name of the operation.

The plan devised a year before the attempted hijacking, was quite straightforward. The hijackers would purposefully target a small aeroplane and book all the seats on it. They would commandeer the aircraft and leave the pilots restricted, but unharmed on the landing strip, while one of the conspirators would take control of the aeroplane and direct it to Sweden.

I speak with filmmaker Anat Zalmanson-Kuznetsov whose film “Operation Wedding” reveals the compelling story of her parents, leaders of the group, “heroes” in the West but “terrorists” in Russia, even today.