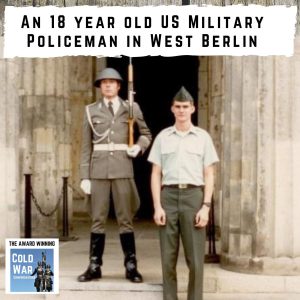 Richard Blevins enlisted aged 18 in the US Army in March of 1987.  He completed  Basic Training  & Military Police School training in July of 1987 and was posted to West Berlin as a United States Military Policeman.

He describes his selection for Berlin duty while at Rhine-Main AFB in Frankfurt and his first journey across East Germany on the US Duty train to West Berlin.

Richard’s first year consisted of patrol duties and combat training as well as serving at Checkpoints Bravo and Charlie as the assistant to the Non-commissioned Officer in Charge.

He also got selected as a traffic accident investigator in 1988 where he would patrol with the West Berlin Police and respond to all car accidents involving US military, dependents, and civilian workers as well as West German nationals.

Richard also describes how he heard the news on November 8th, 1989, that Erich Honecker had lifted all travel restrictions on East Germans starting at midnight.

He is a close friend of Michael Rafferty who appeared in episode 13 with his account of the last days of Checkpoint Charlie. Don’t miss Michael’s video of 1980s Berlin shown below.