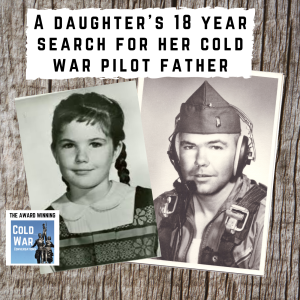 In 1961, members of the Alabama Air National Guard secretly took part in the failed invasion of Cuba by U.S.-backed Cuban exiles known as the Bay of Pigs. This was a covert attempt by the United States to overthrow the Soviet-allied Cuban government of Fidel Castro.

Pete Ray was one of eight Alabama guardsmen who flew combat missions on April 19th 1961,  which resulted in the deaths of Pete and three members of the Alabama unit.  U.S. President John F. Kennedy later acknowledged America’s involvement but denied that American military personnel had entered Cuban territory. It was not until 1987 did the U.S. revealed that eight ANG members had indeed flown into Cuban airspace.

We hear from Pete Ray’s daughter Janet, who tirelessly worked to find out the truth of what happened that day despite the best efforts of the CIA, the Cubans, and the US government to obstruct her investigations.

Cold War history is disappearing; however, a simple monthly donation will keep this podcast on the air. You’ll get a sought-after CWC coaster as a thank you and bask in the warm glow of knowing you are helping preserve Cold War history.