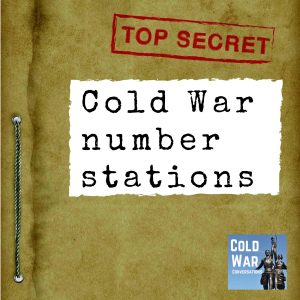 You might remember listening to short wave radio during the Cold War and coming across weird transmissions of metallic voices reciting random groups of numbers through the ether.  These are number stations, shortwave radio stations characterised by broadcasts of formatted numbers, which were being sent to spies operating in foreign countries.

Number stations were used widely during the Cold War and we speak with Jo Reggelt of ShortwaveNumbers.com. Jo has been working with Simon Mason who was a founding member of ENIGMA, launched in the 1980’s after identifying several of these stations.

We discuss in detail the operations behind the transmissions and the stations themselves. You will hear some sample transmissions, including one of drunken Stasi officers serenading their agents after the opening of the Wall.

Jo also details a fascinating UK/Czechoslovakia spy case that centred on capturing an agent red-handed listening to a numbers station.

If you’d like to help to preserve Cold War history and enable me to continue to produce this podcast you can via one off or monthly donations.

Enigma 2000 is a UK based online group, whose aims are to bring together listeners and enthusiasts who monitor and gather information on ‘Number Stations’ and other related radio transmissions.  http://www.signalshed.com/index.htm

Pryom is an international group of radio enthusiasts who came together during 2010 when activity from the station known as “UVB-76” increased. The mystery of this station inspired them to seek out other similarly mysterious stations, and thus into the bizarre world of shortwave radio’s infamous number station  https://priyom.org/

Thank you very much for listening. It is really appreciated .