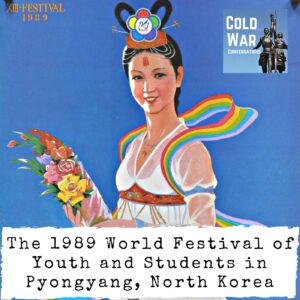 The 13th World Festival of Youth and Students was held from 1–8 July 1989 in Pyongyang, the capital of North Korea. It was the largest international event staged in North Korea up until then.

The event took four years of preparation by the North Korean government, which effectively spent a quarter of the country’s yearly budget (US$4.5 billion) on it. Ultimately declared as the largest ever World Festival of Youth and Students with about 22,000 people from 177 countries attending.

This event was the last festival held during the Cold War era as waves of unrest began to occur throughout Central and Eastern Europe later on in the year.

Greg Elmer has directed the film “The Canadian Delegation” which features long time activist Chris Frazer who was handed the task of assembling a Canadian delegation to North Korea. The film follows Frazer and a number of other delegates as they recount their participation in the Festival as world events continued to unfold around them.

Cold War history is disappearing; however, a simple monthly donation will keep this podcast on the air. You’ll get a sought after CWC coaster as a thank you and you’ll bask in the warm glow of knowing you are helping to preserve Cold War history.

Today’s episode is hosted by co-host Peter Ryan. I am delighted to welcome Greg Elmer to our Cold War conversation…

The Canadian Delegation from SoJu Docs on Vimeo.