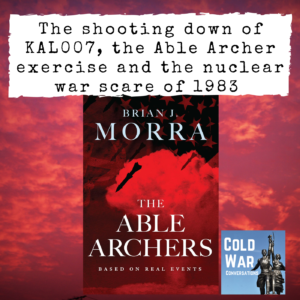 Brian Morra was Chief of Intelligence Analysis for US Forces Japan at Yakota airbase when on 1st September 1983 an unarmed Korean airliner was shot down by a Soviet fighter causing the deaths of 269 people. He describes the less well known subsequent incidents between Soviet and US military aircraft which almost resulted in direct conflict.

The year 1983 was one of the most dangerous in human history. While the Cuban crisis was exceptionally dangerous and both the United States and the Soviet Union had significant nuclear arsenals in 1962, a war in 1983 would have likely ended the human race.

Ronald Reagan the US President branded the Soviet Union as “the evil empire” which created paranoia within the Soviet leadership to the extent that they believed the US was going to launch a nuclear attack on their country. The tension was heightened by several incidents that almost brought the world to war.

Brian has recently written “The Able Archers”,  a novel based on his experiences and the other incidents that almost ended the world in 1983.

Robert M. Gates, former CIA Director  and Secretary of Defence describes “The Able Archers” as “a powerful reminder of the value of human judgment—and the continuing peril posed by nuclear-armed powers.”

I could really use your support to continue the podcast. A simple monthly donation will get you the sought after CWC coaster as a thank you and you’ll bask in the warm glow of knowing you are helping to preserve Cold War history.

Have a look at our store and find the ideal gift for the Cold War enthusiast in your life? Just go to https://coldwarconversations.com/store/