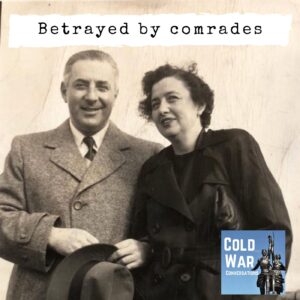 Liz Kohn has been researching Alice Glasnerová, who was imprisoned as part of the early Cold War Czechoslovak show trials known as the Slánský trials.

These were among the most notorious show trials of the 20th century, with the prosecution and sentencing to death of Rudolf Slánský, general secretary of the Czechoslovak Communist party, and 10 other defendants, who had been arrested in a brutal purge ordered by Stalin.

Alice Glasnerová. was Liz’s father’s first wife.  When Liz started researching Alice’s life she had never seen a picture of her and had never read a word she had written. All I knew was that she had been married to her father and had been a member of the communist party. Liz has pieced together a tragic story of a couple although deeply in love, who were separated by the difference in their political views which ultimately resulted in pain, disillusion and betrayal.

If you’d like to help to preserve Cold War history and enable me to continue to produce this podcast you can via one-off or monthly donations.

You can read more about Liz’s research on her blog  https://lookingforalice.com/

A Trial In Prague from Cinema Guild on Vimeo.