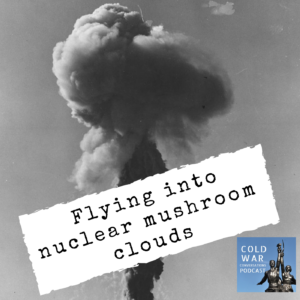 Squadron Leader John Robinson AFC (ret’d) was an RAF pilot who was tasked to fly into the mushroom clouds of nuclear bomb tests to capture samples at Operation Buffalo at Maralinga in 1956, and Operation Grapple, at Christmas Island in 1957.

He tells of his recruitment into RAF, initial training and his cloud sampling missions as well his experiences of watching the tests from as little as five miles away.

It is reckoned that over 22,000 British servicemen participated in the British and American nuclear tests and clean-ups between 1952-1965, along with scientists from the Atomic Weapons Research Establishment and civilians. The majority of men have passed away, and around a tenth of the men remain.

I was honoured that the British Nuclear Test Veterans Association (BNVTA) invited me to their annual reunion and enabled me to capture some of their veterans’ stories.

I could really use your help to support my work and enable me to continue producing the podcast. If you become a monthly supporter, you will get the sought after CWC coaster as a thank you and bask in the warm glow of knowing you are helping to preserve Cold War history.

Thanks to all of those who participated.