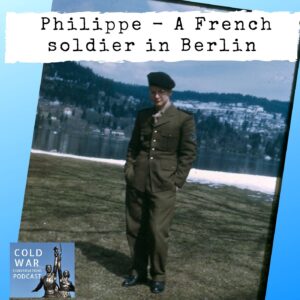 The French Forces in Berlin were the units of the French Armed Forces stationed from 1945 until the end of the Cold War-era in West Berlin according to the agreements of the Yalta Conference and Potsdam Conference.

The troops were the French counterparts to the United States’ Berlin Brigade and the United Kingdom’s Berlin Infantry Brigade in the city.

Philippe was stationed in Berlin from 1972 to 1973 with the French army for his military service. He did not volunteer and was not too happy at first, but started enjoying life outside of the “Quartier Napoleon” as it was called, near the Tegel airport.

His role was in Signals intelligence and during the day he listened to FM radio transmissions of the East German Army as well as the Soviets (GFSA).

If you are enjoying the podcast, you can help me to keep producing these episodes by a small monthly donation via Patreon, plus you will get the sought after CWC coaster as a thank you and bask in the warm glow of knowing you are helping to preserve Cold War history.

If a financial contribution is not your cup of tea, you can still help us by leaving written reviews wherever you listen to us and sharing us on social media. It really helps us get new guests on the show.

I am delighted to welcome Philippe to our Cold War conversation…