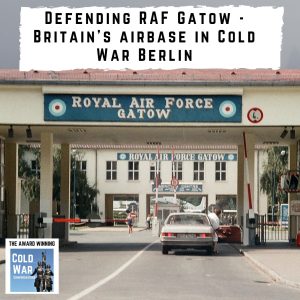 Trevor Howie’s role at RAF Gatow was advising the Station Commander on Station defence during times of war, tension or terrorist threat as well as the defence of 26 Signals Unit at the Teufelsberg listening post.

RAF Gatow’s western side was located right against the Berlin Wall which was clearly visible from the control tower. Beyond the Wall was the Döberitz training area for the Soviet and East German Army.

To gain intelligence about the opposition Trevor used the resident De Havilland Chipmunk aircraft to see across the Wall and observe the neighbouring Soviet and East German forces. He describes the defence plans and exercises such as Exercise Grizzly Bear where every member of the air station would have played a part in its defence.

Trevor vividly describes how he heard that the Wall had opened on 9th November 1989.

It’s a fascinating view of British forces in Berlin and their plans should the Cold War have turned hot.

Cold War history is disappearing; however, a simple monthly donation will keep this podcast on the air. You’ll become part of our community and get a sought after CWC coaster as a thank you and you’ll bask in the warm glow of knowing you are helping to preserve Cold War history.