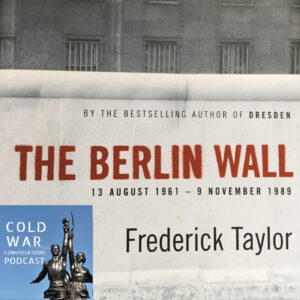 James spoke with Fred Taylor, a historian who has written several books on Germany, about his book ’The Berlin Wall 1961 – 1989’ which will shortly be reprinted to commemorate the thirtieth anniversary of the fall of The Wall.  James and Fred spoke about the origins of The Wall and the division of Germany and of how the gap between the allies widened as Walter Ulbricht sought to create a more distinct identity, ideology, and positioning for the nascent GDR.
During the conversation, Fred talks about how ‘Project Rose’ was conceived and executed and what life was like during the early days of The Wall including the iconic standoff in October 1961 between American and Soviet tanks at Checkpoint Charlie.  This Cold War Conversation gives an interesting look into the origins and early days of the Wall.

BUY THE BOOK AND SUPPORT THE PODCAST HERE

Now if you like the podcast you can help to support us for the price of a couple of coffees a month. You’ll be helping to cover the show’s increasing costs and keep us on the air, plus you get the sought after CWC coaster too.

So back to today’s episode – Fred provides some great accounts of his personal experiences in Berlin as well as the story of the Berlin Wall and its eventual destruction.

We welcome Fred Taylor to our Cold War conversation…