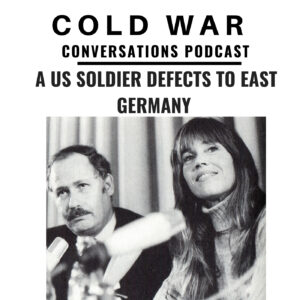 What could make a privileged 24-year-old American serving in the US Army in Germany in 1952 to swim across the Danube River to what was then referred to as the Soviet Zone?

Victor Grossman who was born Stephen Wechsler but changed his name after defecting to the GDR. A child of the Depression, Grossman grew up in an environment that nurtured a commitment to left-wing causes. He continued his involvement with Communist activities as a student at Harvard in the late 1940s and after graduation, when he took jobs in factories in Buffalo, New York and tried to organize their workers.

After being drafted into the US Army and fearful of his discovery as a communist Grossman ended up in GDR with other Western defectors, He was able to establish himself as a freelance journalist, lecturer and author. Travelling through East Germany he saw the failures as well as the successes of the GDR’s “socialist experiment”.

Before we start I’d like to thank our latest Patreons including Steven & Tim Brown. Patreons are supporters of the podcast who donate monthly to support the podcast further and get access to some exclusive extras. Monthly donations can be as small as $3 and every donation helps keep us broadcasting and expanding the show.

Now back to today’s episode. While some of you will disagree with Victor’s views, his first hand account of his experiences is an important part of Cold War history.

We start my Cold War Conversation with  Victor telling us about this early life in the United States.

Interview with Victor Grossman by the Communist Party of Gt Britain