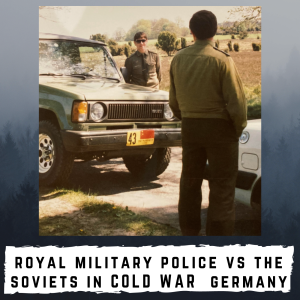 Keith Bailey Joined British Army at 16 in 1973. He was recruited into the Blues and Royals, (Household Cavalry) and served in West Germany as a gunner in Chieftain tanks.

However, he was keen to serve in the Royal Military Police and particularly 19 (Support) Platoon known as “The White Mice”. Their role was to track the SOXMIS (Soviet Military Mission) in West  Germany.

SOXMIS operated under a 1946 agreement where the Soviets, British, US and French agreed to exchange mission groups to patrol the opposing side’s then zones of occupation.

Cold War history is disappearing; however, a simple monthly donation will keep this podcast on the air. You’ll get a sought-after CWC coaster as a thank you and you’ll bask in the warm glow of knowing you are helping to preserve Cold War history.