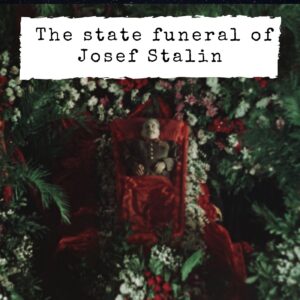 This episode is sponsored by MUBI, a curated streaming service with an ever-changing collection of hand-picked cinema. From new directors to award-winners. From everywhere on earth. Beautiful, interesting, incredible films — with a new one added every single day.

Right now on MUBI, you can watch STATE FUNERAL, an astonishing archival vision of the Soviet Union in the days after Joseph Stalin’s death. The film is followed by a Q&A with director Sergei Loznitsa in conversation with Pietro Marcello (Martin Eden). Our listeners can stream this (and much more) with thirty days free at mubi.com/coldwar.

James Chilcott, Peter Ryan and I had exclusive access to a preview version and in today’s episode we discuss our thoughts on the film.

State funeral is streaming exclusively on MUBI from May 21 and on MUBI, the film is followed by an exclusive Q&A with director Sergei Loznitsa in conversation with Pietro Marcello (director of Martin Eden)

Our listeners can watch this film (and much more) with thirty days free at mubi.com/coldwar.

Note that STATE FUNERAL won’t be showing on the platform everywhere (release areas include the UK & Ireland, North America, Latin America, Turkey, India, Australia & NZ, Asia, and the Middle East). The trial link will work for anyone worldwide.

We mention Radio Lento which is available here