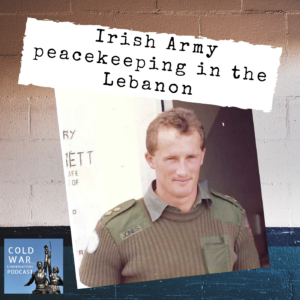 Adrian Jones was commissioned as a lieutenant in the Irish Army in 1983. As a 23 year old officer he served in the United Nations Peacekeeping Force UNIFIL in Southern Lebanon from 1987 to 1988.

The Irish battalion consisted of 580 personnel which were rotated every six months, plus almost 100 others in UNIFIL headquarters and the Force Mobile Reserve. In all, 30,000 Irish soldiers served in Lebanon for over 23 years and continue to serve in Lebanon to this day.

The Irish troops in Lebanon were initially intended to supervise the withdrawal of the Israel Defense Forces from the area after an invasion in 1978 and to prevent fighting between the Palestine Liberation Organization forces and Israel, however beginning in 1985, the Israeli army scaled back its numbers, remaining only in support of the South Lebanon Army in Southern Lebanon which was fighting the newly established Iranian proxy spinoff of the Amal movement – the Arab Shia Hezbollah.

We hear about Irish officer training, the position of Irish neutrality during the Cold War. Among many subjects, Adrian also talks about the challenges of his peacekeeping mission, rules of engagement and the deaths of Irish peacekeepers.

Now I need help to continue to track down these unknown stories of the Cold war and ensure they are preserved before they are lost. If you can spare it I’m asking listeners to pledge a small monthly amount per month to help keep us on the air (larger amounts are welcome too) plus you can get a sought after CWC coaster as a monthly financial supporter of the podcast and you bask in the warm glow of knowing you helping preserve Cold War history.