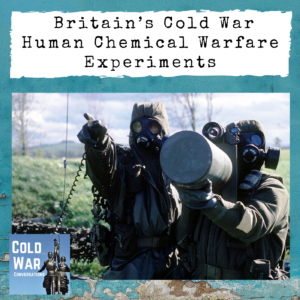 Ian Foulkes was exposed to the deadly nerve agent Sarin in 1983 at the  Porton Down Chemical & Biological Defence Establishment. Porton Down is one of the UK’s most secretive and controversial military research facilities.

Ian describes in detail the process and the ill effects this caused him and shares details of a little-known fatality where 20-year-old Ronald Maddison died 45 minutes after 200mg of Sarin was dripped onto his arm.

We also talk about the development of chemical weapons during the Cold War and the history of the Porton Down Chemical & Biological Defence Establishment.

If you’d like to help to preserve Cold War history and enable me to continue to produce this podcast you can via one off or monthly donations.

There’s further information on this episode in our show notes which can also be found as a link in your podcast app here.

Gassed – British Chemical Warfare Experiments on Humans at Porton Down”(2000) Rob Evans
“Secret Science – A Century of Poison Warfare and Human Experiments” (2015) Ulf Schmidt
“A Higher Form Of Killing – The Secret Story of Gas and Germ Warfare” (1982) Jeremy Paxman and Robert Harris
“Porton Down – 75 Years of Chemical and Biological Research” (1992) G.B. Carter (N.B. Use of Humans not mentioned/only rates one sentence IIRC. I was unable to find it again!)

About Canada’s research and experimentation

“Keen as Mustard – Britains Horrific Chemical Warfare Experiments in Australia (1998) Bridget Goodwin (N.B. I think she has an anti-British bias but good reading and information none the less)